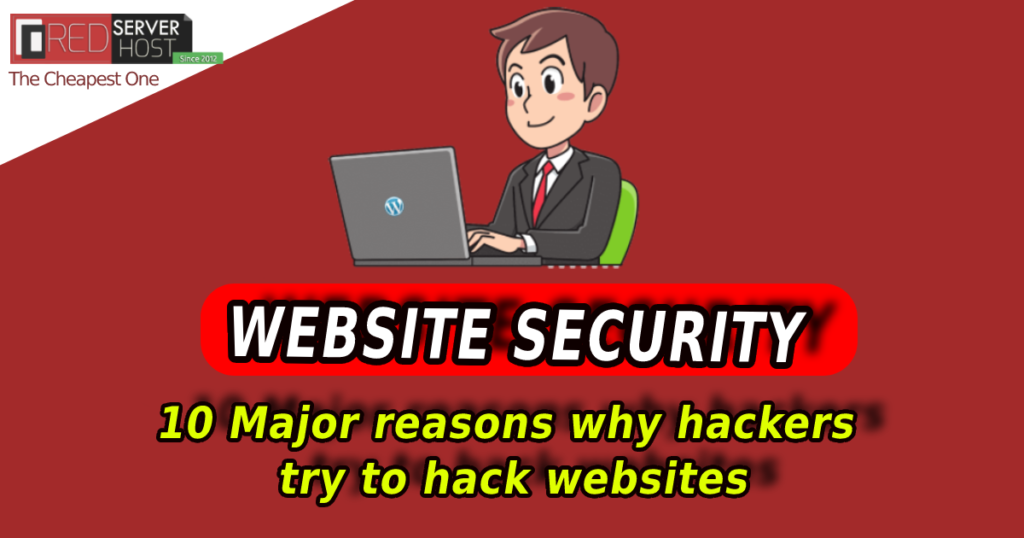 Hacking is an attempt to exploit a computer system or a private network inside a computer. Simply put, it is the unauthorized access to or control over computer network security systems for some illicit purpose.

Computers have become mandatory to run successful businesses. It is not enough to have isolated computers systems; they need to be networked to facilitate communication with external businesses. This exposes them to the outside world and hacking.

But it often comes to our mind that for what purpose do hackers hack? What benefit do they get? So today I am going to present 10 major reasons that will answer this question.

The most popular reason for hacking is stealing money. Online transactions through net banking, payment gateways, credit-debit cards, etc. have paved way for not only for the convenience of purchasing but also for hackers. These days there are a lot of e-commerce websites where people pay through net banking. Hackers simply have to look for security vulnerabilities in these websites. The moment they get hold of them, the money is literally theirs for the taking. They may also try to create some similar pages or links that look like the original website, generally, it is not guessed by the users and they submit their vital information which is sent to hackers. This way they steal money.

We all have seen so many advertisement emails in our inbox like a lottery, some newsletter, some bank account details, some friendship site promotions, celebrity site news, newsletters, etc. many of which directly goes to spam. These are bulk mails. Bulk mailing is mostly done for marketing purposes. The worst effect of bulk mailing is that the IP of the server from where the mail is sent gets blacklisted. This is the reason why shared hosting mails are not guaranteed to be delivered in the inbox because there are multiple accounts and each account is sharing the same single IP. Hence, all the emails sent through it have the same IP behind them. If any user does bulk mailing, every accounts’ emails stop getting delivered into the inbox.

Every website available on the Internet is hosted somewhere on some server. Each hosting has some allotted resources for which the owner has paid bucks. Now, these hackers want to use these resources in bulk and without paying so they hack websites/hosting accounts in order to use resources like CPU, RAM, disk space, etc. for their own use. This causes not only loss of your data but also increases the amount of CPU used by your site resulting in a high load on the server. The server owners in case of shared hosting suspend your account in order to reduce the overall high CPU load.

Phishing is a type of social engineering attack often used to steal user data, including login credentials and credit card numbers. It occurs when an attacker, masquerading as a trusted entity, dupes a victim into opening an email, instant message, or text message. The recipient is then tricked into clicking a malicious link, which can lead to the installation of malware, the freezing of the system as part of a ransomware attack, or the revealing of sensitive information. Phishing is popular with cybercriminals, as it is far easier to trick someone into clicking a malicious link in a seemingly legitimate phishing email than trying to break through a computer’s defenses.

The next best thing to digitally steal money is to get their hands on valuable personal information. Identity theft is currently a gold mine for cybercriminals—one that reached an all-time high in 2016, with up to $16 billion worth of losses caused by fraud and identity theft.
This can have devastating consequences for a user, especially when the attacker starts targeting important aspects of their lives such as insurance, bank, and credit card information. Many users are actually unaware that they have been compromised, and get surprised when faced with the consequences of identity fraud.

To Defame Site, Services, or Server:

Hackers can create a botnet and then overwhelm a system with traffic. They infect a network of private computers with malicious software which can then be used for a variety of different purposes- without the user’s knowledge. This way they defame the IP by making it blacklisted for spamming or they tend to increase server load by increasing the number of process execution. If a server goes down then the reputation of the server is degraded.

Because They Are Hired For Hacking:

Some hackers get paid by organizations or individuals to degrade others’ services. Hackers hack sites and then increase server load/CPU processes or bulk mail in order to decrease the quality of IP and server.

Server disruption attacks usually have their own personal motive. These types of attacks have one goal in mind, which is to shut down or render a particular website useless. Distributed Denial of Service (DDoS) attacks are a good example of disrupting the services offered by a web server. In this form of attack, hackers seize control over a group of computers and use them to ping a certain webserver to overload and ultimately shut down the website.

As A Political Move:

Hackers who have this target are motivated by religious or political beliefs, attempt to create fear and chaos by disrupting critical infrastructures. It is done by vigilante groups who are trying to raise awareness about a political issue or just to create chaos. Other times, it is in the form of international threats such as foreign governments or military aiming to undermine their enemies. This type of hacking is typically kept out of the realm of public knowledge.

As A Hobby Or Mode Of Entertainment:

Probably the most annoying of all reasons. Believe it or not, sometimes hackers hack for fun, out of boredom, or to simply get attention. On the other hand, this sort of hacking can sometimes be beneficial as it exposes certain vulnerabilities in online security paving way for an improved and more robust system.

The first step that your criminal hackers undertake is to find known or common weaknesses in the various website platforms. Popular platforms that are regularly under attack are WordPress, Joomla, Magento, osCommerce, and Zen Cart. These platforms are popular with hackers because they are popular with masses who are attracted to their open-source nature and the fact that they are free. Hackers will obviously be able to attack and reach more computer systems the more popular the platform.

Be smart and proactive with regard to your website security. Be Safe!